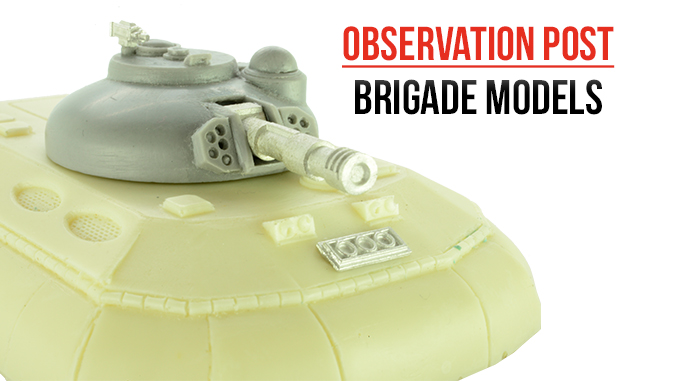 Although they have been around for a while, the Hammers Slammers range of resin and metal models has now found a new home at Brigade Models.

The resin and metal molds have now been completely re-mastered, with new production molds, resulting in crisp, clean castings requiring little clean up.

For those that don’t know, Hammers Slammers are a series of novels and short stories firmly placed in the ‘military sci-fi’ genre. In fact, they pretty much came to epitomize it. The stories chart the progress of a mercenary unit as they fight for cash across a war-torn galaxy. The stories were used as the basis for a set of wargames rules designed for use with 6, 15 and 28mm miniatures, which are also now available from Brigade.

The main focus of the novels and game are the ‘Blower’ tanks, heavily armoured ground effect vehicles (GEVs) which come in a number of variants. These are used almost exclusively by the Slammers, and offer a tactical advantage.

Other GEVs that feature are the Combat Cars, armed APCs, and the A21 Air Jeeps, two to four man scout and utility vehicles, as featured below.

We don’t often feature ‘old’ ranges like these but Brigade Models have done a great job in re-vamping the models. There are both vehicle and infantry models available from the company in both 6 and 15mm. We’re unaware of the current home of the 28mm range but are glad to see that Brigade are committed to making the other sizes available.