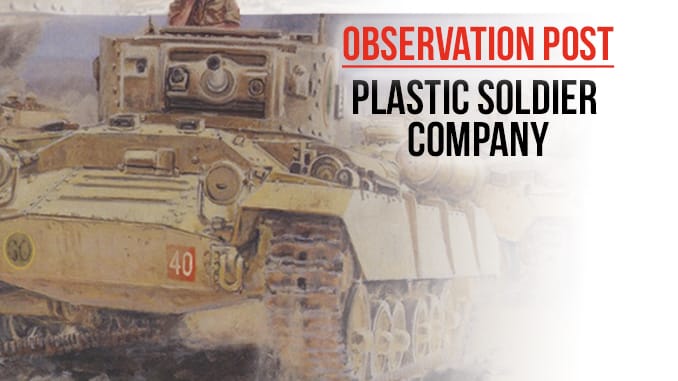 One of the best things about Plastic Soldier Company is their decision to offer the same vehicles and tanks in more than one scale. One of their latest offerings is the Valentine Infantry Tank, in two popular wargaming scales and with a host of options.

The 1/100th scale version of the Valentine has enough parts to construct 5 tanks in total. There is a single frame per tank but this has been designed with multiple options in mind. Each frame has the required parts to construct a Mark II, III or IX version of this versatile tank, which is basically using different hulls, track assemblies and turrets as desired. The instruction sheet covers all the options, plus has a colour coded guide to the frame to aid in locating parts. Also included are commander figures for not only British use but also Soviet.

The 1/72nd scale version of the Valentine has enough parts to construct 3 tanks in total. There are two frames per tank but the same options to construct a Mark II, III or IX version are still here, again using different hulls, track assemblies and turrets. The instruction sheet included covers all the options and has the same colour coded guide to the frame. Also, commander figures for British and Soviet use are included.

Ultimately, this is the same kit, up-or down-scaled as required. This makes for an interesting aspect, as noted in previous reviews – the 1/100th version is a sturdy piece of wargaming kit but the 1/72nd Valentine’s hull is made of such sturdy plastic that it could probably take a hit from a 2-Pounder shell! I actually think this is a good thing for a tabletop wargaming model – once assembled, these will be around for a long time and cope with handling and transport issues very well. I’d still like to see a 1/56th scale boxed kit for each tank, perhaps two to a box, but understand if this isn’t economically viable. Another nice, useful and adaptable couple of kits from PSC.