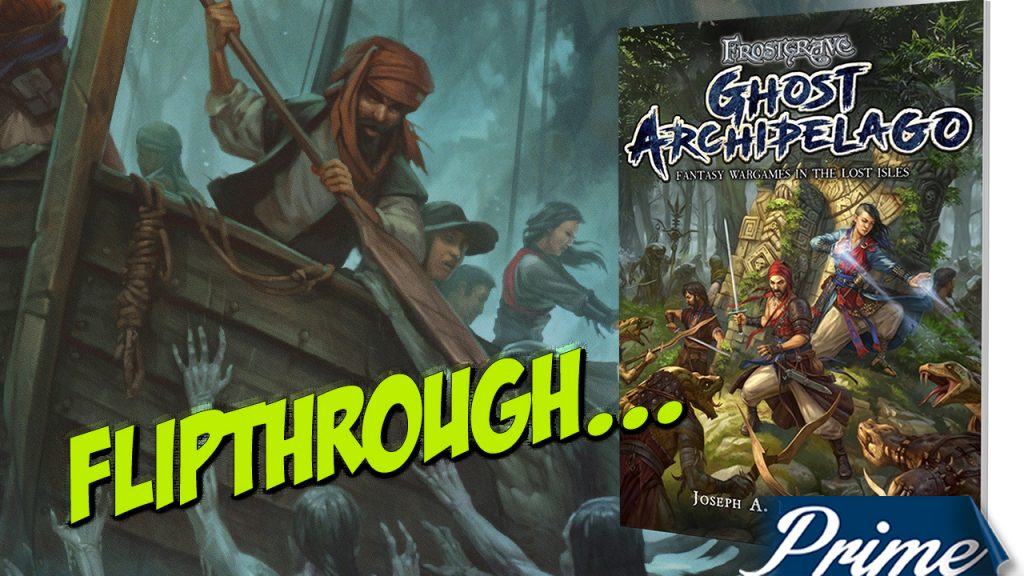 Following the success of the Frostgrave fantasy game set in the frozen city of Felstad, we head too much warmer climes for the next offering from Osprey Games. Frostgrave: Ghost Archipelago is a new, stand alone game set within the same ‘world’ but with a different focus. Players create a Heritor to lead a Crew into the Southern Ocean, to visit the tropical realm of lost isles known as the Ghost Archipelago.

The rules begin by providing some guidance regarding what you need to play. In brief, the game is designed for use with up to ten miniatures in each crew, a two foot by two foot table a two player game, reaching four foot by four foot for more players, one unique and four other treasure tokens, a tape measure in inches, suitable terrain and at least two twenty-sided dice.

The central character in your adventuring crew is a Heritor, the descendant of those who visited the Ghost Archipelago the last time it appeared, about 200 years ago. These ancestors of your lead character once drank from the Crystal Pool, granting them superhuman powers. Your character has the remnants of these mighty powers but seeks the Crystal pool for themselves. The first stage for players is to create their own character, choosing one main focus and up to four subsidiary Heritor Abilities that they can use if they roll the right target number on the D20. However, these abilities come with a price for over-use, something called ‘Blood Burn’, a debilitating consequence of having used an Ability, potentially weakening the character during the game. This represents the player on the tabletop and is the focus character class for the game. The Heritor may carry up to five items, including magical ones.

The next character to create is a Warden, the guide and protector of a crew in the Ghost Archipelago. These characters draw upon chosen aspects of Nature to enable them to cast spells to protect themselves and others. Players choose a single Warden for their crew (apparently they don’t mix well together) and decide on their ‘Branch’, which dictates which spells can be used. You can choose from Earth, Storm, Vine and Wave, which grant you access to the elemental magic associated with each branch. Wardens start out knowing four spells, three of which must be from their own branch and one which may be from another. A Warden may carry up to three items, including any magical ones.

Once the ‘star’ characters are sorted out, you flesh out your crew, with up to eight Crewmen volunteers, signing up for adventure and wealth, who may in turn be equipped with various weapons. Up to four may be classed as Specialists, who must be hired using some of the starting gold for a Heritor. Both Crewmen and Specialists may be given magic items. There are a variety of Specialists, including the useful but mundane Crossbowman and Archer, up to the more esoteric Pearl Diver and Herbalist.

The game turn is split into a number of phases, with an Initiative roll, with the highest to lowest roll acting in result order. The first player’s Heritor acts, followed by the second player’s Heritor and any subsequent players. The process is repeated with the Wardens and then the Crewmen. Each figure can carry out two actions, but one must be movement. Group activation is also possible, with the Heritor and up to three Crewmen being able to complete their actions in the same turn. Stats are rolled against as needed to accomplish certain tasks. These are modified as dictated, adding stat values to the basic roll to score more than a target number.

Combat is divided into and to hand and Shooting, plus using Heritor Abilities and Casting Spells. These are subject to positive and negative modifiers, can be poisoned and can cause Critical Hits the higher the die roll. In addition, Heritor Abilities come with a price, the Blood Burn, where Heritor characters automatically receive a point of damage whether they are successful or not, although they suffer more damage if they fail. Consequently, the Health of a Heritor suffers the more often they use their abilities.

course, Crews are encouraged to gather treasure during the adventures, are subject to attacks by creatures and can find themselves using small boats or launches, which can be the scenes of skirmishes. Games end, in ordinary games, with one side having more treasure tokens than the other. However, rules are provided for carrying your Crew into a Campaign, with each character, piece of treasure, injury, and part of the adventure having an effect on individuals and the party alike. Experience is gained, new skills acquired and treasure assessed for its worth in gold and use in the next adventure.

There are a number of potions, spells, armour, weapons and magic items that can be bought with your treasure, although the precious Map Stones, showing a little part of the way to the Crystal Pool, must be jealously guarded by the Heritor who has them. You can also recruit new crew members, or enhance your base, the ship that enables you to travel from place to place.

The details of each Heritor ability and Warden spells are included, plus a way to randomly generate the same for a more unpredictable, challenging character to play.

The game provides eight scenarios, which may be randomly generated or worked through one by one for campaign play. Each scenario is clearly laid out but adds to the mythos of the Ghost Archipelago and its many dangers. Some of those dangers are outlined in the Bestiary section, and range from creatures to local tribesmen, the undead, dinosaurs and much more.

This is both a worthy successor to the original game and a whole new realm of adventure. The author has taken the original rules system and created a diverse, distinctly different focus. The use of new character types, adventure hooks and new foes really makes this an original game which draws you into a different world. If you liked Frostgrave, you’ll recognize most of the rules elements but with a whole new level of ‘twist’. And, if the idea of the frozen city never appealed or you’re coming to this game with new eyes, then the more free-from nature of adventures across a realm of mysterious islands, with a distinctly Sinbad-esque or Ray Harryhausen twist, could be just what you’re looking for.